The team on board Sail Surf ROAM are currently sailing in the Lau Island Group near Fiji and had a request to talk about what their cruising catamaran ROAM was like to sail upwind.

To check out some of Sail Surf ROAM’s latest blog updates visit their website.

And while we’re at it, here’s their latest video… Episode 15: Team Roam surf hidden waves and dive with huge Bull Sharks.

The title speaks for itself but also includes some great aerial footage… Right up until a disastrous drone incident!

We received a message from Gerald after our New Caledonia to Fiji passage video, asking how the boat goes upwind and how we run it. Not wanting to get into any cat/mono debate. They are all boats to me. However, I thought I would answer in some detail here.

Having sailed 3000Nm of the last 4000Nm since leaving Tasmania with the wind fwd of the beam, we have probably figured out as much as we want to learn about up wind sailing. As I write this we are in Fulaga in the Southern Lau Group, Fiji. We are just 250Nm from Tonga and this is all the against the grain sailing we intend to attempt this year.

This is our Reefing Plan for upwind work. Downwind we watch the TWS and don’t have any more main up than we can safely round up in if we had too. We can and do reef downwind. Maybe that can be another blog.

As with all multihull sailing, you really sail off the instruments, IE with one eye on the apparent wind speed. Having said that, if any mono cruisers who claim they don’t, venture onto a modern racing mono I expect there would be a fair level of number reading going on there. On a catamaran you do get a good feel for the boat and based on noise and speed you know when its time to reef without looking at the numbers. However, we find if we stick to the above we can keep it all in check and sail to our optimum performance, at an appropriate speed for the sea state.

Passage making offshore, it’s the sea state you sail too, not the wind speed. In flat water powered up, ROAM does 9-12 knots SOG (speed over ground), hard on the wind. Offshore forget it, launching out of rollers is no fun for people, the boat or anything in it. When we have up to 15 knots TWS ( true wind speed) it is a dream. With 15 – 20 knots TWS, you can typically only sail at 7-9 knots SOG. As soon as the TWS approaches 20 knots, anything over 7 knots SOG is very unpleasant due to the sea state. Think a lot of water over the boat,  big launches of the windward hull, leeward bow and resultant landings into the next wave. The hull slams on ROAM are relatively OK (relative to catamaran or monohull boats) but still no fun. ROAM has slender hulls and entrys so the landings are reasonable. Also decent tunnel clearance means its rare to get more than a tickle under the bridgedeck. Reef 1 and full Genoa. A little less pressure on the boat and a little gust security. Minimal change in boat speed. 2nd Reef and Full Genoa. By this stage we are a little lee helmed and the Genoa sheet loads are high. We drop to the staysail early usually and just chill.

A typical night watch on ROAM going upwind in 20 to 25 knots TWS goes like this:  3 Reefs in Thomas Coville (the mainsail), Jessica Watson (the staysail) out, Franck Cammas (the crazy Genoa) put to bed. ROAM in wind vane mode steering 035°. Main cracked down the traveller managing boat speed. Watch crew inside keeping dry monitoring the SOG, and AWS. From the saloon, we can keep a visual watch and monitor position on the charts. All you really do is duck out into the cockpit every now and then to have a good visual check and adjust the traveller to keep the boat doing 6-7 knots. Every now and then you get a gap in the swells or the breeze freshens, if you don’t feather the main you are doing 8-10 knots SOG and the AWS has crept up to 35 knots. If you don’t do anything in this scenario you will be launching out of the next set of waves and waking up the off watch crew who will not  be impressed. You wouldn’t know by the clear skies but its gusting to 40 knots when this pic was taken. ROAM is 3rd Reefed and our 13sqm Staysail/Furling Storm jib is out. The Blue track above is in light air with full Mainsail and Genoa flat seas and great conditions. Wind speeds 8-12 knots. The Red track is 2 or 3 Reefs in the Mainsail and the Staysail out most of the time. 15-25 TWS. Tacking angles end up about the same no matter what sail configuration. This screen shot was taken whilst sailing upwind offshore with full Mainsail and Genoa. Light seastate. The TWS indicator is a little off. It bounces around alot as the speed log moves through the waves.

The thing most people don’t think of when deciding how far down the performance boat path they want to go with their ideal boat, is on these lighter slim daggerboard boats when you want to sail at normal 140-180Nm a day speeds you can with the smallest of sails. Having  small sails means low loads and ease of  management. Get some light air and you are still sailing at decent passage making speed. Get the right conditions and you can wind it up and have a blast, or make that passage in daylight or without the extra night or two at sea…

I would be really keen to hear some feedback from other sailors, comparisons of up wind sailing approaches. I have been checking out some tracks from a few races, RORC Caribbean 600,  Round Ireland Race and Brisbane to Gladstone. The Outremer 5X vs a Gunboat 62 in the RORC 600 was interesting. The gunboat with its blade non overlapping jib made nearly 90° degree tacks, but the Outremer ended up winning by making 110°. The Dazcats in the round Ireland race were getting close to 90°. Interestingly, most of the similar boats in the B2G looked to tack through something like ROAM does. At the end of the day where the best balance of speed/height and total distance covered is for me is very sea state dependent. One day it might be more comfortable to pinch high and go slower, the next falling off to lessen the angle of attack to the waves may be better. Maybe we should all carry a larger range of headsails!

I would like to give a shout out to Doug at Sail Wildling who writes on his blog with some great technical discussion. The more we discuss topics in detail the more we can all learn from each other to get the most from our boats. 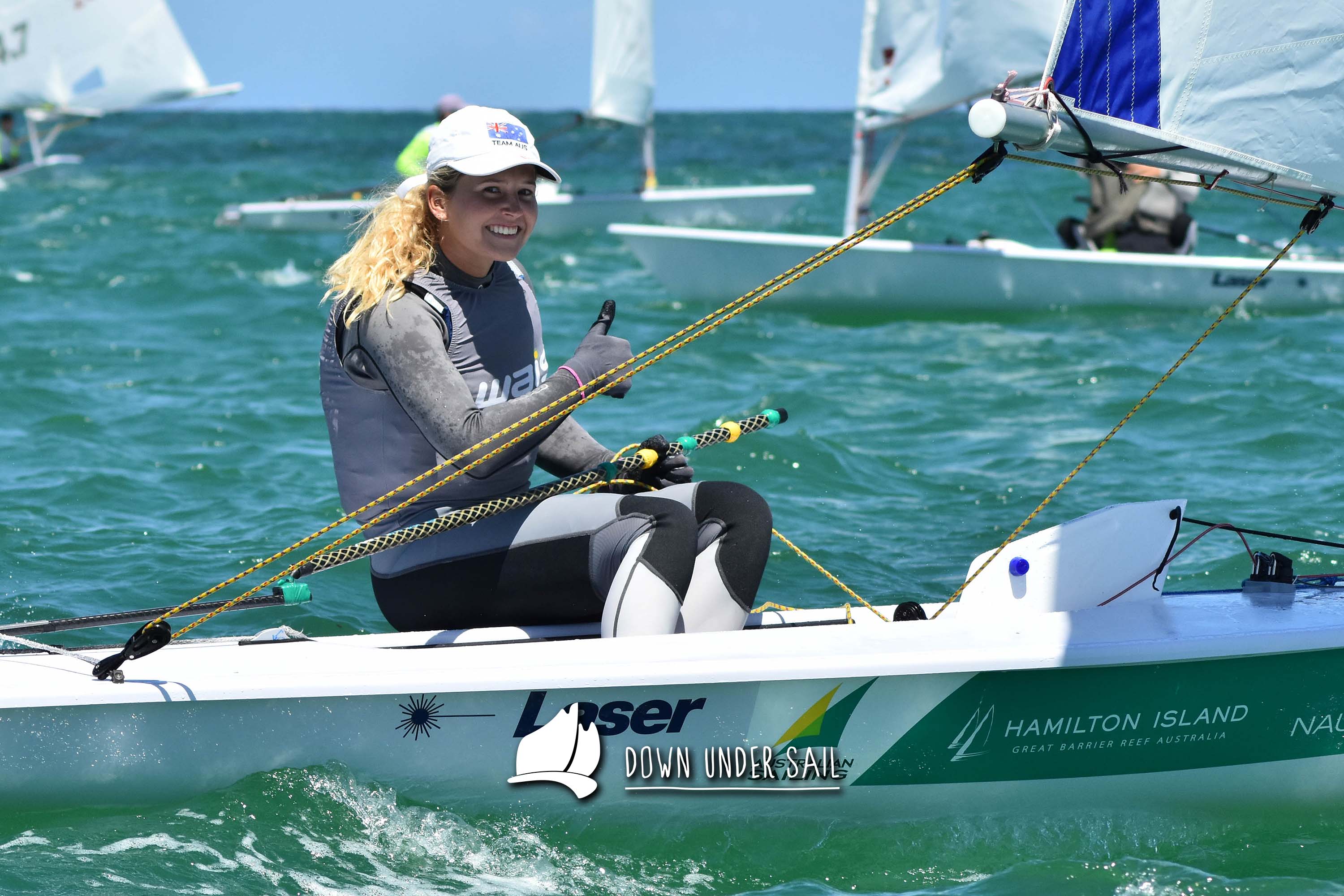 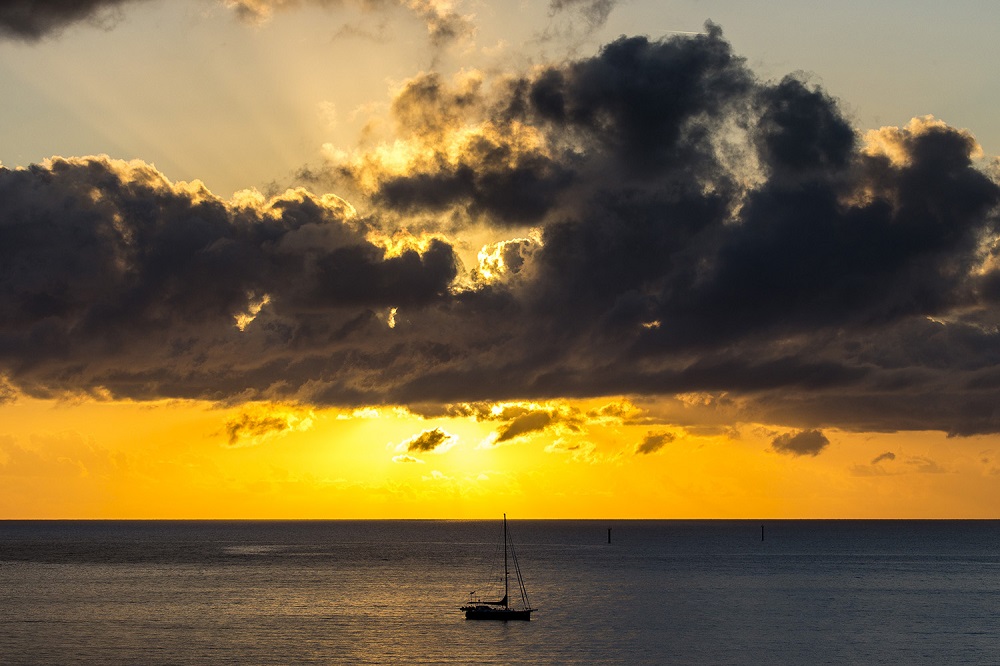