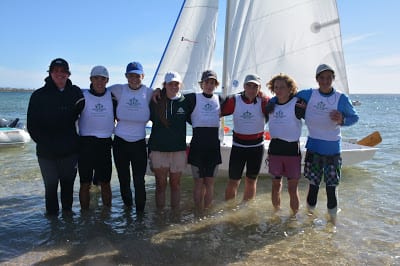 IN WHAT was a thrilling finish, Westminster School’s number one team took out it’s second South Australian Secondary Schools Team Sailing championship in a row after defeating Port Lincoln’s St Joseph’s School 2-0.
Westminster did it the hard way losing to St Joseph’s in the first round of the finals 2-1 and then had to face off against a hungry St Joseph’s second team to have the opportunity to defend the state title in the best of three grand final.

After St Joseph’s 2 defeated St Peter’s College 2-0 in the first round of the finals, they went down to Westminster 2-0 in the preliminary round allowing the reigning champs to go up against the St Joseph’s 1 team again in the grand final, who at this point were looking unstoppable.

The Westminster boys sailed faster and were more consistent in the grand final and grabbed victory from the jaws of defeat with a compromising 2-0 victory.

The win made Westminster only the third South Australian school to win back-to-back state championships and the first from outside of Port Lincoln following on from Port Lincoln High School and St Joseph’s.

It was also the first time St Joseph’s had lost two state championships in a row since their first title in 2000 making it clearer than ever that Adelaide schools are catching up and matching it with the state’s greatest team sailing school of all time.

When all was said and done, students got together at the Ceduna Town Hall for the presentation evening, which was where the champion school was recognised and awards were given out to other schools that performed well.

The hometown Ceduna Area School’s number one team was awarded the most improved trophy, based on their improved result from the state championship a year earlier.

Ceduna 1 finished equal fifth overall however seventh on a count back out of the 20 teams competing, which was a massive improvement from the states a year earlier in Meningie.

St Joseph’s 3, which finished sixth overall, was recognised as the first placed all-girl team being awarded a new trophy that has been created for the honour.

As the girls champion team they will automatically gain a spot at the upcoming national championships in Goolwa in July.

Ocean View College A were also recognised on the night, being awarded the trophy for the first composite team after finishing ninth overall.

St Joseph’s and Westminster will head to Goolwa in July as well vying for the coveted national championship where both teams will be favoured to compete well.

Posted by Down Under Sail at 19:40 No comments:
Email ThisBlogThis!Share to TwitterShare to FacebookShare to Pinterest

FOR the first time in the state’s history more than 100 races were run on a single day of team sailing, to help kick off the South Australian Secondary Schools Team Sailing Championship to a flying start.

A total of 11 rounds of 10 races were sailed to total 110 races by the end of sailing on the first day. 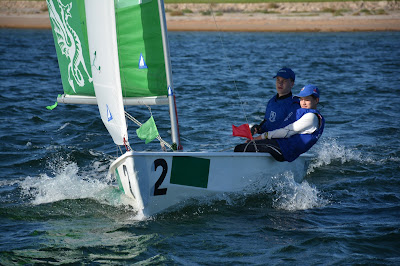 St Joseph’s School from Port Lincoln finished as the dominant school at the end of day one with St Joseph’s 2 sailing well to sit atop the table with 10 wins from 11 races, ahead of Westminster and St Joseph’s 1 who finished with nine wins.

St Joseph’s 3, Immanuel A and St Peter’s College’s 1 team are all sitting equal on seven wins after the first day and will be fighting it out with each other for a berth in the finals.

There were also some great displays of sportsmanship, including one sailor sailing half a race without a jib after it fell down, another bunch of sailors going out of their way to help an opposition sailor in to their boat after a capsize in the pre-start and another sailor going out of his way during a race to pick up a stray bailer.

Tomorrow should be interesting as the competition heats up so stay tuned to the DUS Facebook Page for live updates.

Posted by Down Under Sail at 00:39 2 comments:
Email ThisBlogThis!Share to TwitterShare to FacebookShare to Pinterest

PREPARATIONS are underway for this year’s South Australian Secondary Schools Team Sailing Championship, which will feature 20 teams at the Ceduna Sailing Club between April 20 and 23.
The reigning champions from Adelaide’s Westminster School head in to the regatta as firm favourites after they took out last year’s title in a dramatic finale against Port Lincoln’s St Joseph’s School. 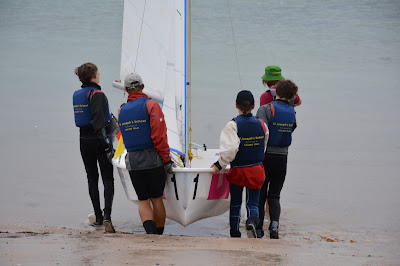 St Joseph’s will be keen to regain their title having never lost two state championships in a row and having won 14 of the last 16 instalments of the event.
The Westminster team will have the likes of Alex Higgins, Matt Meaney and Angus Higgins as skippers, all of which have had great seasons sailing in the 420 class.
The St Joseph’s skippers Marty Hood, Lauren Henderson and Cameron Forbes will also be a tough outfit to beat with all of them having a lot of experience team sailing at the national level.
Another school that will be knocking on the door of the two favourites will be Immanuel College, captained by Oscar Mitton with brother Harry Mitton and Alec Mascolo as his other skippers.
St Peter’s College, Ocean View College and the South East regional champions Investigator College will also be eyeing off a finals spot to have a crack at the state championship.
It is also great to see such a strong display from girls competing in the event with Walford Girls School bringing a team across to compete.
To keep up to date with results throughout the regatta save the following link.
bit.ly/TeamSailingResults
Posted by Down Under Sail at 22:05 1 comment:
Email ThisBlogThis!Share to TwitterShare to FacebookShare to Pinterest

Talented youth sailors turn it on at states

JUST less than 70 junior boats took to the water for the Musto South Australian Youth State Championship on April 2 and 3 with plenty of close and competitive racing on display.

The optimists, bics and internationals cadets had the largest fleets, while there was also great performances from the lasers, 420s and one 29er.

The event capped off a great season of competitive youth fleet racing in South Australia including the South Australian Youth Tri Series, which took place over three separate weekends at three clubs before Christmas.

Credit must go to Ella Konings and Sarah Short in Interstellar, who made up the only 29er on the water and had some fast spinnaker rides in the stronger winds on the Saturday.

Fresh out of an optimist, Ella showed her skill on the helm while Sarah’s experience came in handy on the wire.

In the 19-strong optimist open fleet, Jonas Barrett in Sharky finally broke through and took out the regatta win after falling just short in each of the Tri Series events.

Jonas sailed very consistently to take out the overall result, three points clear of one of his Brighton and Seacliff rivals Quinn Auricht in Bring It On.

Adelaide Sailing Club’s Ben Hinks in Zig Zag capped off a great season in the optimist finishing third overall and is now in preparation for the European Optimist Championship in Crotone, Italy in July.

For the first time at a Yachting South Australia event this season, the fleet was able to be split in to three groups to allow for an intermediate fleet of six boats.

Goolwa Aquatic Club’s Will Howard, sailing Chicken Dinner, was the standout in his fleet coming away with five out of the eight race wins and finishing six points clear of second.

He was followed by Adelaide Sailing Club sailors James Wilson in Jaws 2.0 in second and Connor O’Brien in Squid in third.

The optimist green fleet had a strong showing with 11 boats on the water and some fantastic improvement over the weekend of sailing.

With strong winds hitting the regatta on the Saturday, the green fleet was only able to finish one race and therefore got an early start on the Sunday to end up completing a total of seven races throughout the weekend.

Goolwa Aquatic Club’s Albert Howard in Gustly finished the regatta off strongly with four wins in the final four races to bring home the title, which was a great effort considering he retired from the opening race of the series.

In second place was Largs Bay Sailing Club’s Fraser Baker in No Rush whose successful opening day helped him to an early lead, followed by fellow Largs sailor Murphy Cowen in Gem in third.

The o’pen bic fleet had its best showing for the year with a total of 11 boats on the water competing for the state championship.

The fleet was also boosted by guest appearances from two of the classes top sailors from around Australia – Michael Parks in Swoosh from the Royal Geelong Yacht Club in Victoria and Talia Bulstrode in Bixciting from the Tinaroo Sailing Club in Queensland.

These two sailors were outstanding and finished first and second overall respectively, with Michael taking out six of the eight race wins and Talia claiming the other two.

The international cadet fleet has been one of the most competitive South Australian fleets all season and the Youth States weekend was no exception with only seven points separating the top three.

Port Lincoln Yacht Club’s Sam Paynter and Gil Casanova in Full Speed Ahead took out the overall regatta win after sailing consistently throughout the weekend.

This team continues to improve as they prepare for the world championship in Argentina later this year.

A competitive fleet of six 420s made the trip to Largs Bay for the Youth States with Brighton and Seacliff boats making up the majority of the entry list.

Fresh off a third place at the recent national championship in Sydney, Brighton’s Matt Meaney and Sam Magarey in Rampage finished as the overall winners sailing consistently in all breezes.

They were closely followed by fellow Brighton sailors Alex Magarey and Matthew van Riel in Yahoo in second and Angus Higgins and Josh Tonkin in Double Trouble in third.

The weekend began with two laser 4.7s and two laser radials so the sailors decided to all use 4.7 rigs in order to constitute a series.

The radial sailors were always going to have a slight experience advantage on the younger 4.7 sailors but everyone took a lot away from the weekend and all had some great results. 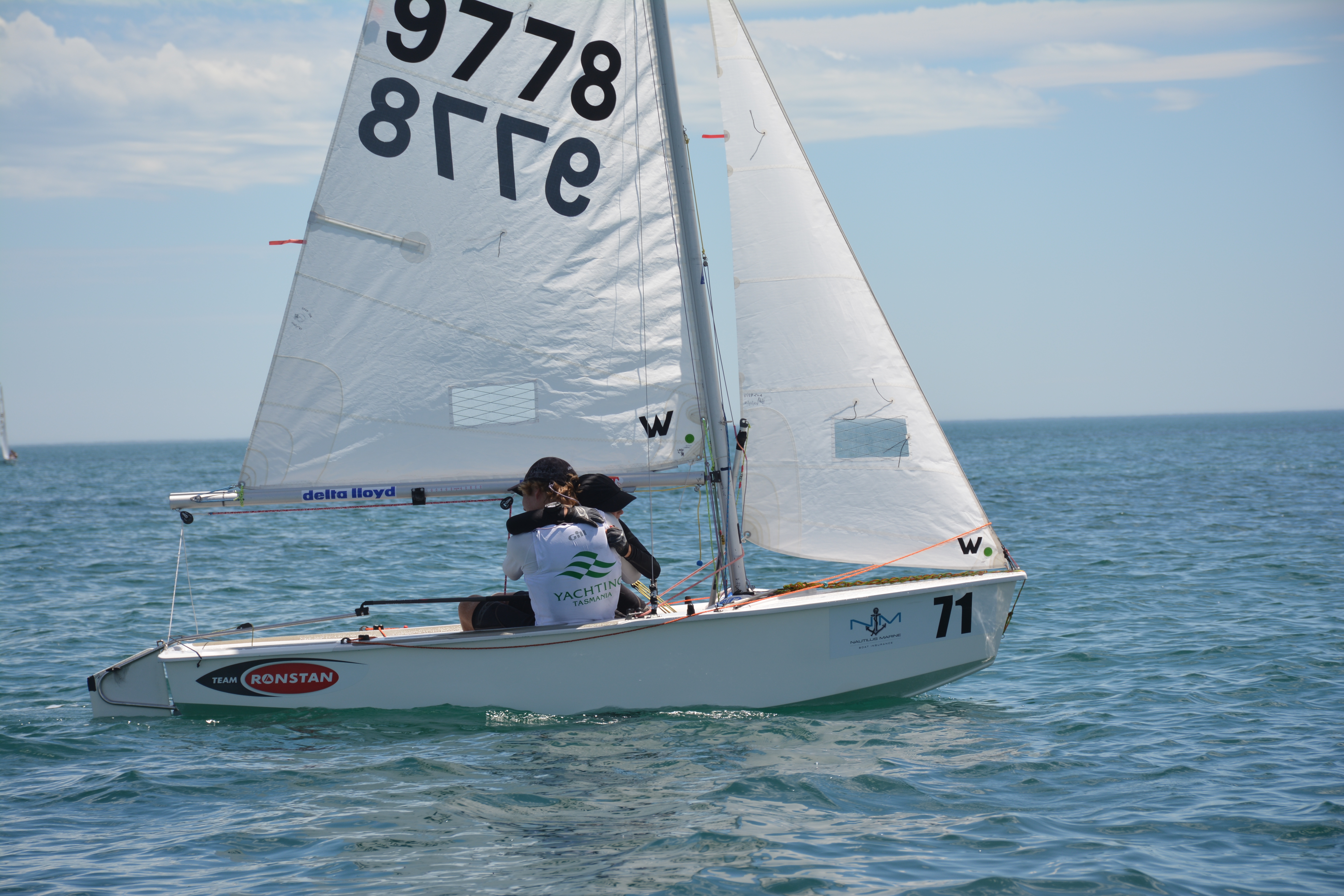 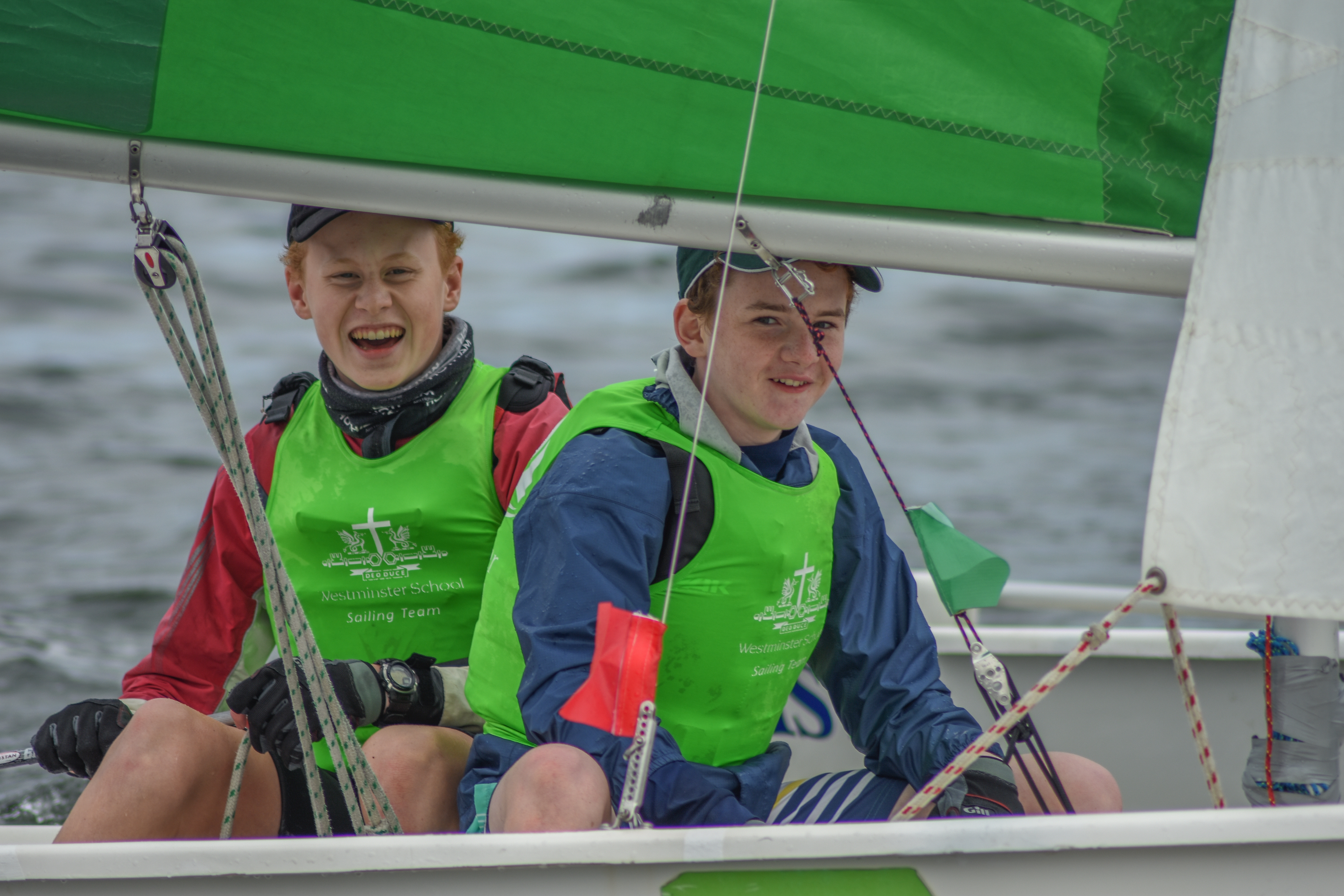 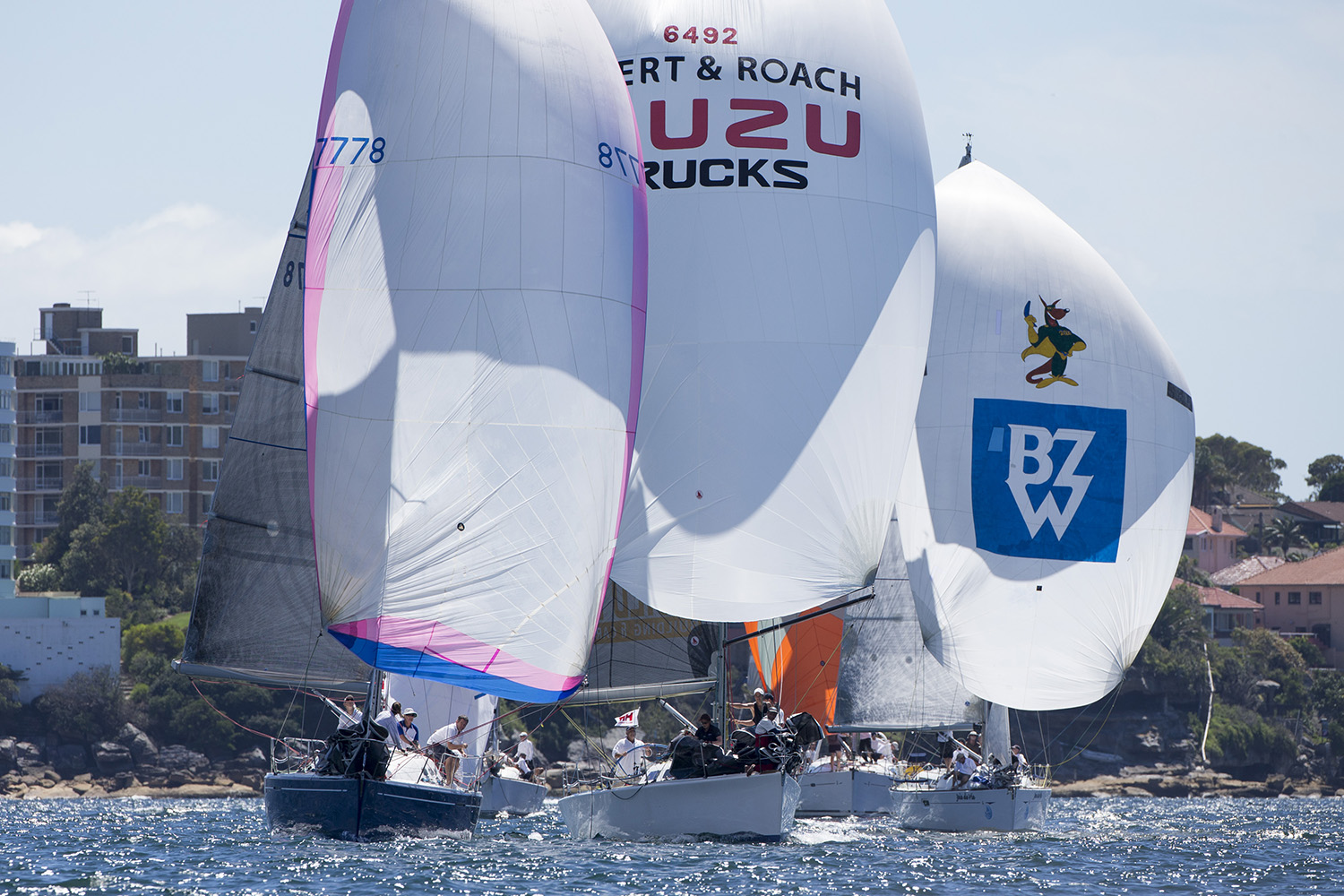