One of our major goals at Down Under Sail is to bring to light the positive ideas people have to grow the sport. We have been sharing with you a lot of stories recently about the 16ft Skiffs and various individual pathways that are on offer at various clubs.

We’re really keen to help clubs develop pathways that are specific to their needs as senior classes are the backbones of clubs. While a lot of emphasis is placed on juniors and replenishing the youth stocks, if you have no senior class, no objective, no place for these kids to go, then we will never be able to fix the fact that they’re dropping out. Big fleets and close racing in a truly national fleet is a huge draw card to the sharpie.

Have a look at the Australian Sharpie class for example. Like the 16s in New South Wales, and to an extent Queensland, the Sharpie is an iconic class in Australia. Both classes are only sailed in Australia, but have been the backbones of club racing around the country for nearly 100 years.

Since the early 1930s the Sharpie has always provided a culture that is infectious and has also created many legends of the sport that we as kids were able to look up to. They were honest, hard-working sailors that got the best out of themselves.

In the 16s, there’s iconic names such as Cassidy (WA), Tanko (NSW), Barnabas (NSW) and in recent times Knapton (NSW). Sharpies, particularly in the southern states, have had their own champions, names in the 70s like Simmer, Peelgrane and Bethwaite from New South Wales, through the 80s and 90s with Smith and Hamilton from Tasmania, Soulsby, Deussen, McCloud from South Australia, Chappell from WA, McLennan from Victoria and in recent times the dominance of Mal Higgins from South Australia.

All of these sailors have competed on an international stage in various classes and are all names that kids at their clubs look up to.

We love the fact that we can create heroes and role models within our clubs and classes and every club and class has their own heroes and stalwarts that make us love the sport and give us someone to look up to and emulate as kids. The social side of the Sharpies and outdoor lifestyle is drawing many young people to the class.

In New South Wales, and in particular the Manly 16ft club, the viewpoint on their pathway goes from Manly Juniors through to Flying 11s, 13ft Skiffs and eventually 16s. The Sharpie class is doing the same thing with massive growth recently in the southern New South Wales zone, Victoria and South Australia ready to launch again with a massive influx of youth.

The South Australian committee comprises of eight people, with four of them under the age of 23, and other states are starting to follow suit with Jake Nichols now the president of the growing Victorian association and head of the organising committee for the recent nationals at the ripe age of 24. This year’s nationals were held at Mordialloc Sailing Club in Melbourne, which featured a 43-boat fleet with a total of 17 from the home state – a number not seen from the Vics in some time.

One of the things that has happened recently was the individual purchasing of Junior boats, firstly in NSW when they sent two junior boats to Queensland a few years ago. The boats were provided by members, gear was given to them from spares and then away they went. From there they bought their first boats and continued a strong involvement in the class. Young teams from different states helping each other at the Georges River nationals 2014/15.

New South Wales went from about eight boats in 2009 to 24 boats in 2014, with around 40 per cent of the fleet under the age of 25. The key to this success was the families involved and making the sharpie the senior class the kids wanted to get into and then helping the club create the pathway that funnels into the boat. This can work in any club, you just need a plan.

More recently, there have been three young guys from South Australia that have dipped into their own savings to purchase a boat for some more up and coming juniors to have a crack in. The aim is for people to be rotated through the boat for them to have a go and then for it to be made available during regattas. The International Cadet has provided a great pathway through to senior classes such as the sharpie. The sharpies are now working closer than ever with the Cadets. Photo: Dave Birss, Epsom Rd Studios.

Very similar to the 16s, what makes this idea great is the young guys are only just out of being juniors themselves and already want the next wave to come through and have a crack. At Down Under Sail, we firmly believe senior classes like the Sharpies and the 16s, as well as many others, provide a format of sailing that is a heap of fun, the competition at national and state level is of an extremely high quality, and the nationals is pretty much a massive party that we don’t want anyone to miss – the more the merrier really.

It’s now got to a point where if people can’t make the whole series due to work, they will still make the trip and get involved for a few of the major social functions, spend it with mates and bring their gear if anyone needs a ride. Families are what Sharpie sailing is all about. A heap of of third generation sharpie sailors sailing at the moment.

With the 16ft Skiffs and also the I14s now building their boats in China, the Sharpies have undergone a new building program at home in South Australia. The moulds were updated a few years ago but it was difficult to get boats built and encourage current sailors with reliable boats to upgrade.

Boats are built by Tim Haselgrove, whose family has three generations of history when it comes to building this iconic class.

Now, through an initiative of the SA Sharpie Sailing Association led by state president David Snoad, we are producing two to three new boats a year and working towards a complete trail-away package for roughly $30,000.

The South Australian association forks out the money to start the build process and commits to building three boats per year. This therefore makes sure a boat is readily available a few times each year and there is no waiting time on getting the hull built unless there is greater demand than what the builder can push out, which lets be honest is a good situation to have.

One of the new boats fresh out of the mould.

Two new hulls were completed in 2016 with another and the first of 2017 currently in the process and nearly completed. With a new hull costing $15,500 and with tailored fittings package and a template not a great deal more, it is still fantastic bang for your buck to get your hands on a 20ft long high-performance dinghy.

The fact the second hand market is turning over again now with great boats for sale at around $7000-$13,000 and competitive boats for as little as $2500-$5000, it is no wonder why this class has stood the test of time. Tony Turton in “Don’t Poke the Bear” on a big day off Adelaide.

Another reason why the class is flying particularly in the southern states is the boat itself. When it’s blowing 25 to 30 knots off Adelaide and Melbourne and you have a big seaway running, there is very little that can actually get around the course.

These traditional classes like the Sharpie, Fireball and 505 still thrive in these conditions, however even a 505 in 30 knots off Adelaide is a handful. The Sharpie seriously launches uphill and with the big fleets and close racing downhill it’s always a good rush, you are still racing not just surviving. Current 505 National Champion Sandy Higgins lighting up Lake Illawarra in the Sharpie class some years ago.

Like the 16s, the sharpies have great ties to the youth classes, with many champions coming through the International Cadet class. The cadet is strong in South Australia, Victoria and Tasmania, with a smaller fleet out of Middle Harbour in Sydney.

These are boats that may not be super flighty or have the latest technology, but they will survive due to history, an international presence with good coaching and the fact they can still handle seriously big conditions when required.

Not to mention the racing the cadet class has on offer is some of the best for juniors in Australia, learning to sail a two-up crew with a traditional spinnaker and racing in fleets of up to 80 boats. This relationship with the Sharpies and International Cadets has gone one step further with the SA Sharpie Association sponsoring a heat of the recent nationals, which were held at the Largs Bay Sailing Club in Adelaide.

The association’s plan was to try and future-proof our own class and encourage the next generation of young sailors to jump into a Sharpie when they age out or grow out of the International Cadet. The Sharpie family enjoying a social function after racing.

The Manly 16s are providing a structured, well-run professional program, run by enthusiasts who have shown foresight to really get the club going. The influx of young people and fleet size is only a result of people giving up time and equipment for the benefit of the class. Forget the money side of things, none of it happens without the drive of people.

The Sharpie class is working on this same principal in the southern states and hopefully it makes the clubs and classes stronger, providing a way forward for our youth.

There are many examples of classes doing great things and if you have one please do not hesitate to hit us up, we would love to hear your story. 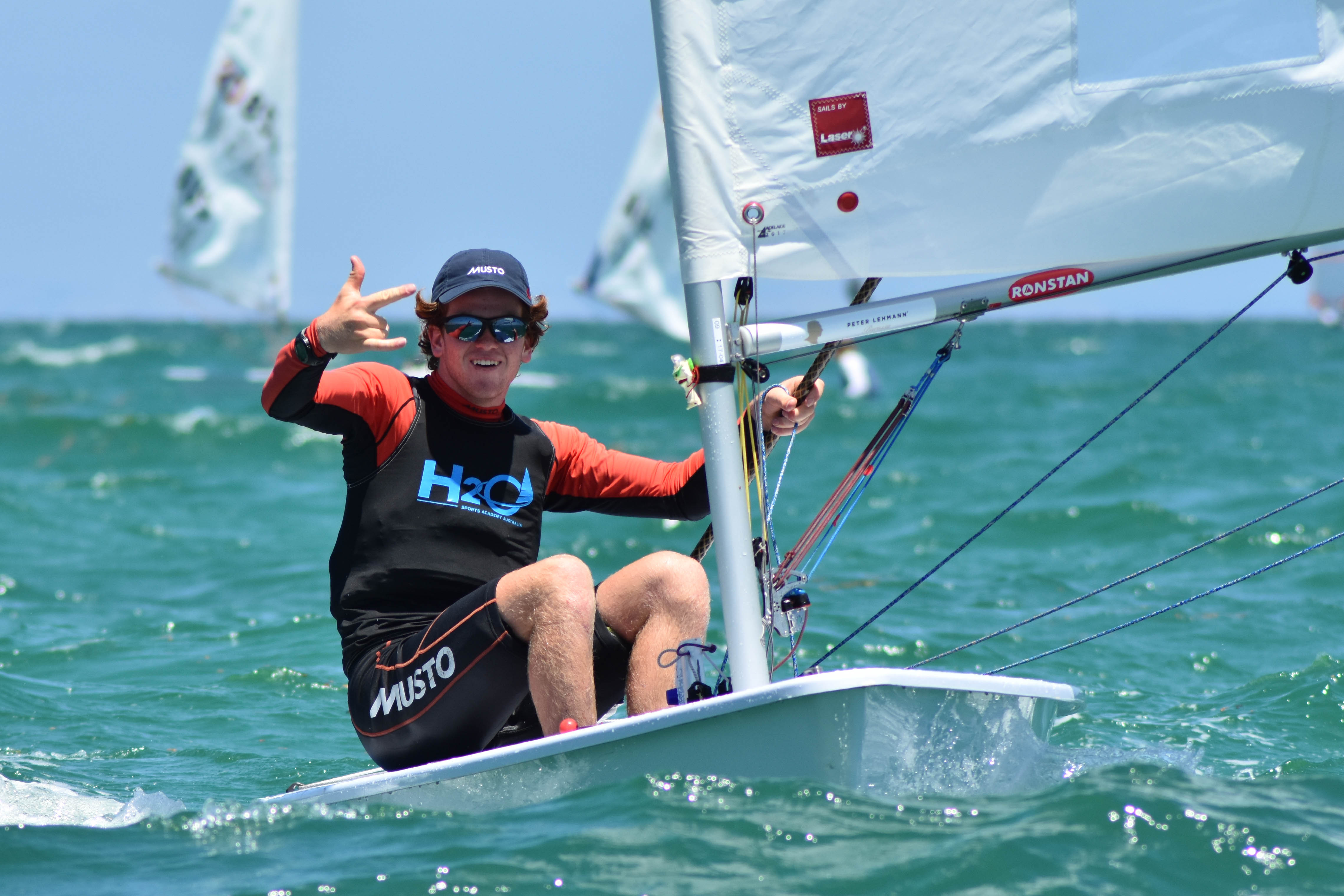